A downloadable visual novel for Windows and macOS

A mediocre translator burned out by capitalism.

A writer who has only been published once in her entire life.

They meet as roommates and develop a relationship that is perhaps much more than love.

I Became Gay from Translating My New Roommate’s Short Story (or GFT) is a yuri visual novel about two "working" adults in the city of Chicago. There are some adult elements. It is the first major project by the Prof. Lily visual novel collective, who aim to tell stories that face our harsh subcultural reality head-on.

Special Thanks: moekki and more to come

Windows: Users encountering issues expanding gft_demo_win.zip have reported that using 7zip to open the file fixed this issue. The file on the page has now been replaced with a newer version. If you are still encountering issues with the newer file then please contact us!

Mac: When opening the game for the first time, you may receive an 'unidentified developer' warning, which can be bypassed by right-clicking the file and selecting 'Open'. See here for further instructions.

it's so well written and so fun to play! i got to the 'end of demo' screen and did a silent scream with head in hands because WOW i did not want it to end. absolutely looking forward to the full game. i find it very interesting how junko is facing the 'questioning my passion' thing and i'im really curious about how she resolves it in the end! i'm sure it'd be very inspiring. aaaaaaaaaa!!!!

I feel like I'd be doing this game a disservice if I didn't write a review for it. Not because it's particularly great, but because there's a lot of potential here to make it that way. The initial appeal of the game for me was Fiona's design, which is eye-catching and unique. The music and art in this game is top notch, except for the Antdueler theme which kinda sucks. However, the most important part of a visual novel is the writing, which is lacking in some areas. I like how Fiona will often go on a spiel about translating and what it means to do that for a living, giving some insight into a job most people never take the time to think about. This works in the beginning of the game when she's alone and there are no plot points being introduced, but the pizza parlor scene is where the game quality starts slipping. During this time the player's interest has shifted to Junko, the new and mysterious love interest, and what will come of her first outing with Fiona. Rather than focus on the girl in front of her, Fiona spends the entire time mulling over a troubling Twitter thread by herself and chooses not to discuss it with Junko. This scene would flow a lot better and be much more interesting if instead of a wall of narration, the information was given through a conversation between the knowledgeable Fiona and the interested Junko. As it is now, this scene is very boring, and I think a back-and-forth between the two characters would be leagues more engaging. The other gripe I have with the writing is the awkward shift to third person after getting back to the apartment. Putting the player in Junko's shoes is a great idea executed poorly. I think this transition would feel much smoother if the narration stayed in first person but the color of the text box changed to indicate that a different character is speaking. There is also a bug that made me unable to load the game from the main menu. I had to start a new game and wait until I could load my save from the prologue. Not game breaking or very annoying, but something worth fixing. I hope you take my criticisms to heart and create a game well worth the seven dollars.

good story and well written :) it shows well how the world is ,

Junko and Fiona are so cute :)

And the features didn't lie, that's a lot Irasutoya illustrations.

this is the cutest shit i've ever seen

update: read through the demo and really enjoyed it, I can't wait for the full game to release :) 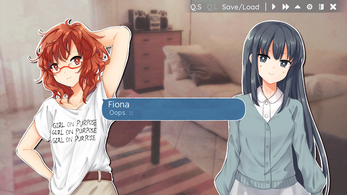 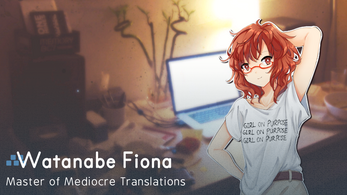 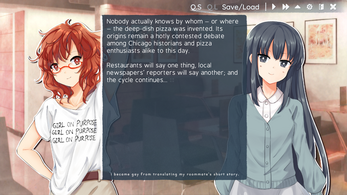 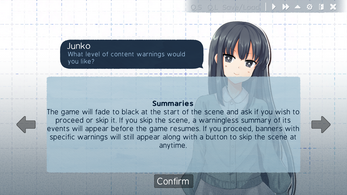